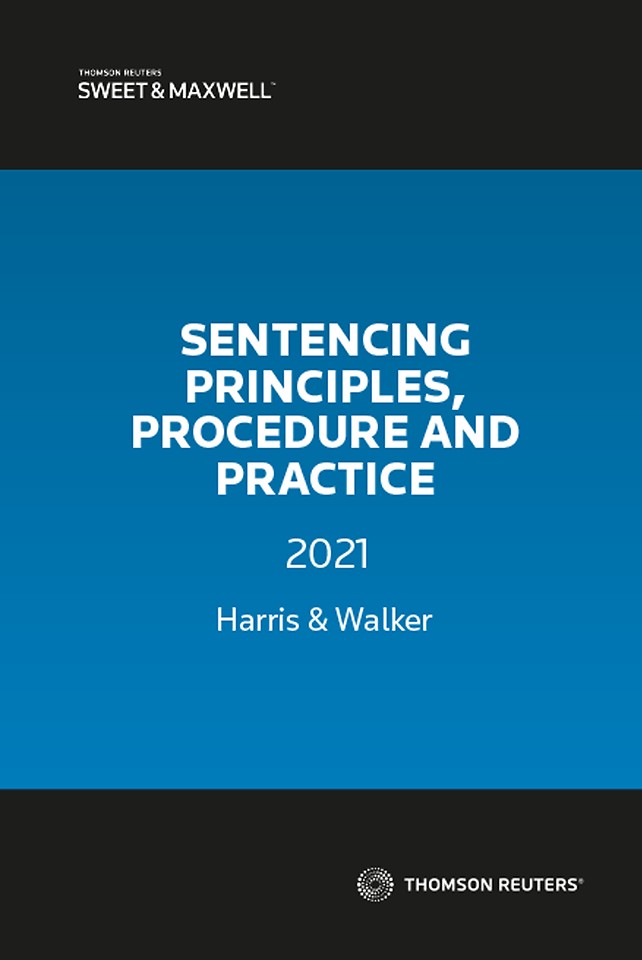 This new annual title is an essential introduction and companion to the new Sentencing Code. The book is split into two parts: Part A contains everything you need to know about sentencing procedure, courts’ sentencing powers and the sentencing principles, including the Sentencing Code; Part B provides guidance on determining the appropriate sentence for almost all criminal offences.

Lyndon Harris and Sebastian Walker were the lead lawyers at the Law Commission working on the drafting of the Sentencing Code. This new work guides practitioners though the various stages of a sentencing hearing and clearly indicates the considerations applicable to a sentencing decision. The title includes extensive expert commentary and summaries of all the relevant case law. For use in sentencing hearings and appeals, in court and for research.

- Written and structured to follow the Sentencing Code indicating the extent to which previous case law remains relevant and applicable
- Includes explanatory commentary from the authors who were closely involved in drafting the Code at the Law Commission
- Important case summaries with expert commentary
- Analysis of sentencing guidelines, identifying particular issues and providing commentary
- Includes all relevant legislation such as Magistrates’ Courts Act 1980, Proceeds of Crime Act 2002 and Criminal Justice Act 2003
- All in just one volume and designed for ease of reference
- Updated annually
- Coverage extends to both the Crown and the Magistrates’ Courts

Sebastian is a member of the faculty of law at the University of Cambridge. He co-authors the sentencing chapter of Archbold as well as being Editor for Current Sentencing Practice and the Criminal Appeal Reports (Sentencing). Previously Sebastian taught at the LSE and worked at Attorney General’s Office with a particular focus on unduly lenient sentences. He is a freelance editor for Criminal Law Week.